In this post our guest blogger, Kirstin Wilmot, explains how her research into thesis writing provides insights into how students can learn to move effectively between concrete data and abstract theorising. She uses the concept of ‘semantic gravity’ from Legitimation Code Theory to explore this movement in doctoral theses. Kirstin is a final year PhD student in the Department of Sociology and Social Policy at the University of Sydney.

Theorising data in PhD research is a daunting task. It’s easy to get lost in the wilderness of data, and when the commonly given advice is to just ‘apply theory to your data’, it’s easy to see where anxiety creeps in. What does ‘theorising’ even involve?

There is little consensus on how to theorise. Most studies tend to adopt a focus on the importance of using theory in research, but don’t provide much guidance on how to actually apply theory to data.

I have used ‘semantic gravity’ from Legitimation Code Theory (LCT) to better understand the theorising process. LCT is a sociological theory that analyses knowledge practices. ‘Semantic gravity’ is a tool that can identify how forms of knowledge can range from concrete, specific instances to more generalised and abstract forms. These different forms that knowledge takes are represented along a continuum and are understood as different kinds of strengths of semantic gravity. In doctoral writing, these different strengths are seen in moves between detailed description of specific instances of data from a context of study (stronger semantic gravity) and more general and abstract interpretations of the data (weaker semantic gravity). For example, moving from a particular experience of one student in one context, ‘Being part of the Tuesday reading group helped develop my thinking’ (stronger SG) to a more general and abstracted interpretation that could account for multiple students across multiple contexts, ‘Communities of practice play an important role in students’ learning in higher education’ (weaker SG).

In a pilot study of my PhD research I examined a student’s draft data chapter and compared it to the final version in her published dissertation. Using semantic gravity, I was able to track how her theorising craft developed over time. The tool also allowed me to identify what features made the final version more successful than the draft version.

Being able to track movements between concrete and abstract knowledge when theorising in doctoral writing and making these movements explicit to students is valuable, as research has shown that this is actually quite hard to do. However, it is a necessary part of PhD research because it enables insights gained from one research context to be generalised across contexts. Doctoral writers therefore need to learn how to do this effectively.

A new perspective on an old problem

In my study I have identified four different strengths of semantic gravity that doctoral students move between when applying theory to their data. These are reflected on a continuum, defined relatively to one another.

Developing a continuum of semantic gravity like this enables students’ writing practices to be mapped across texts as they move from rich description to theoretical interpretations of the data. It is a useful tool to show how their knowledge practices develop over time as they go through numerous iterations of a chapter. A semantic gravity continuum like the one above can be adapted by supervisors and could be used as a scaffolding tool for feedback in supervision. Mapping texts using a semantic gravity continuum also enables the different types of knowledge in texts to be illustrated using ‘profiles’. Profiles are great because they provide an immediate visual of what is going on in a text, in terms of how the student is building knowledge. I will demonstrate this below!

How to move between data and theory

When students start analysing their data, their texts are often comprised mostly of summarising descriptions of the data and quotes from the data itself. For example:

Ted also described climate change in terms of opinions rather than facts: “Climate change, well it’s the big thing at the moment and everybody has an opinion” and “people are entitled to their opinion”.

This results in relatively strong semantic gravity, because the writing rests heavily on specific instances of data. This kind of writing forms the following profile.

When students introduce theory into their writing for the first time, my research found that they often make sudden leaps to theoretical concepts, without much build up to, or explanation of, the theoretical interpretation being made. For example:

The arguments that Joe and Jock constructed were in service of establishing (B), that they are justified in not acting, rather than being about the science (epistemic relations). 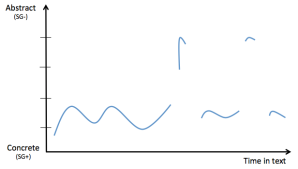 This leads us to a valuable lesson: it isn’t just what you use; it’s how you use it. For example, it’s not just about mentioning theoretical concepts when discussing data (such as in the example above). Successful theorising is about transforming understandings of specific instances of data into more abstract interpretations – and in order to do this successfully, the student needs to show how that transformation has occurred. Let’s take a look at what happens when the student starts to do this after several iterations.

In this example, after the student made a few attempts at analysing, she starts to weave the knowledge cross the four strengths of semantic gravity more regularly and incrementally. She does this by moving from rich description of specific examples from the data to gradually generalising these examples away from the specific context, before interpreting the data using theory. For example:

The conversations focused on ordinary people’s prerogative to form their own beliefs and opinions about climate change based on their personal experiences and the views of those they trust, rather than on the advice of climate scientists or policy experts. There was an emphasis on the legitimacy of climate change views that were based on personal and subjective beliefs rather than on facts. As such, epistemic relations were downplayed (ER–): the debate is conducted not on the basis of competing scientific facts but on competing beliefs and opinions. There was a stronger emphasis on social relations (SR+): on the importance of subjective experiences and points of view.

Here, the student builds up to a theoretical interpretation (using the concepts of ‘epistemic relations’ and ‘social relations’ from her theory) and explains why this interpretation has been made. By moving between theory and data in this way she is able to make her thinking process explicit to the reader. Writing of this kind creates the following profile.

Here we can see how the shifts between specific instances of data (stronger semantic gravity) and more abstract interpretations of the data (weaker semantic gravity) are more frequent, connected, and span a wider range in the more developed text. The text also ends on an abstract level, enabling the insights gained from the data to be applied to other contexts.

Key insights for learning how to theorise

While the four strengths of semantic gravity used in the profiles might seem common-sense and obvious, all that makes sense is not always common. This new way of understanding the messy problem of how to integrate theory and data provides two valuable insights.

First attempts at theorising often start with rich description, as the student starts to make sense of the data. When theory is incorporated, it is often first imposed on the data – seen in big leaps from specific instances of data to abstract theoretical constructs with little evidence of how the student arrived at the interpretation. A semantic gravity analysis can show why some texts are more ‘integrated’ and ‘sophisticated’ and why others are more ‘disconnected’ and ‘underdeveloped’, without students having to rely on vague adjectives.

The continuum of semantic gravity identified here can be used as a scaffolding tool to help students demonstrate their thinking process as they generate theoretical interpretations of their empirical data. If big leaps are being made between concrete and abstract knowledge, students can use the tool to learn how to more explicitly step through the theorising process in their writing, both in terms of building up to theory, and for unpacking theoretical interpretations. The advantage of the tool is that it is flexible: it can be adapted to suit any field or theory (the four strengths identified here were generated from the data itself).

Semantic gravity provides us with a valuable tool for identifying and unpacking what makes some attempts at theorising more successful than others. It provides a tool for both supervisors (to diagnose issues in student writing) and students (who can use it as a scaffolding tool).

3 thoughts on “Learning how to theorise data in doctoral writing”