I’ve been preparing a workshop that includes a short section on writing titles. It’s an area of writing that I’ve always found difficult myself, and I am full of admiration for those who come up with clever, witty, memorable titles that perfectly encapsulate the subject or argument of the piece of writing. Within a specific field of research, it can sometimes feel like all the journal articles have almost the same title, with tiny variations to point to their very specific focus and contribution to the conversation. What advice can researcher developers offer to doctoral writers?

One of my colleagues has a particular talent for titles – he’s even inclined to dream up great titles and then work out what the article would need to be to fit that title. While that may not be good advice for doctoral writers, it’s kind of fun to be so inventive and playful when it comes to academic writing. Tim Moore’s (2020) article in the Australian University Review 62(1) – with its own memorable and helpful title! – offers interesting insights into quirky article titles. Moore reminds us that researchers are not necessarily sucked in by such wittiness: cleverly titled articles don’t actually receive more citations than those with more mundane but informative titles. However, I personally find memorable titles useful when I need to identify and return to articles read previously.

Moore’s article also includes some interesting reflections on the role of the colon in titles (e.g., “Colons in titles: frequency and value”), titles that use the form of verb-ing + noun (e.g., “Writing titles”) and alliteration (e.g., “Tentative titles in trying times”). These are all common forms and can be used very effectively (or not, as Moore also shows us). 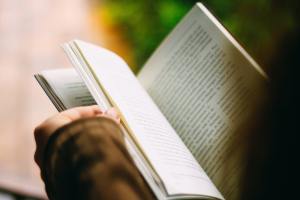 Key message titles. Titles are extremely useful for carrying the key message of the article. This can be presented as a straightforward statement of the key finding or argument. Instead of  “Voice as a threshold concept in doctoral writing”, I could have been more direct: “Authorial voice is a threshold concept in doctoral writing”.  An advantage of this approach is that, even if readers never get beyond the title, they’ll still understand the main point being made. Identifying this one-sentence argument of the article is also a very helpful way to stay focused when writing, to avoid wandering off on tangents that might be interesting but are ultimately confusing for the reader.

Quotation from the text. I personally very much like the kind of title that takes a quotation from the text that encapsulates a key moment of insight or central message from the research. This was the inspiration for the title of a paper I wrote with a colleague on team supervision: “They’re the bosses” asserted one interviewee. And there we had it, the main idea that doctoral writers, in recognition of the hierarchies at play in the university system, need to respond to what all their supervisors ask of them.

Searchable titles. It is also good practice to consider what keywords are useful for readers looking for your research in databases and online. Be canny about how to write titles that optimize search engines so that the work is found easily. What are the keywords and their synonyms that readers are likely to look for? Try to cover this within 65-70 characters. Most academic journals offer good advice on this approach (see, for example, the guidelines from Taylor and Francis, Wiley and Elsevier).

Doctoral writers very often need to communicate their research to an audience beyond their supervisors, examiners and disciplinary peers. We see some good examples of this used for Three Minute Thesis titles that are very different from the thesis title; instead of carefully including all details to ensure that an examiner is perfectly located in the topic, a short, catchy title for 3MT captures the listeners’ attention. Last year, for example, the winner of the Asia-Pacific 3MT competition, Jessica Bohorquez, entitled her talk “Guardians of the pipelines”, while her journal article is entitled “Identifying head accumulation due to transient wave superposition in pipelines”. At my current university (ANU), the 3MT winner, Lithin Louis, used the title “Mysteries of a beating heart” to present his thesis on “Molecular and cellular roles of RNA-Binding Proteins in cardiac biology and disease”. Similarly, posts for online newspapers such as The Conversation use much more accessible titles than their academic journal articles do.

When researchers are engaged in public outreach, their titles might need to be shorter than we usually see in academic articles and often also use more emphatic language (“hate”, “brilliant”). To attract the interest of a broader audience, it can also be useful to focus on the “who” part of the research, rather than the “why”; that is, drawing attention to the human face of research can sometimes be more emotionally appealing as a starting point to get your audience to read on.

The following exercise, adapted from Richard Leahy (1992), offers productive fun in generating lots of potential titles. I think it is useful to put clear timings on the exercise so that participants go with their first thoughts rather than agonising in what might already be a stuck place (maybe just 2-3 minutes each for the first 4 prompts, then faster for 5-7, and a little more time for the final prompt).

This exercise often sparks some creative thinking that generates just the right title.

Moore does remind us that, “irrespective of the title, if the research is sound and the writing good, the work will find its way regardless” (p.56). This is sound advice. It’s great to provide helpful titles for readers, but it’s never a replacement for good research.

Do you have some other exercises that you use with doctoral writers to help them design good titles for their work? I’m also keen to hear from you about better titles I could have used for this blog post – as I said at the beginning, it’s not my strongest writing skill!

2 thoughts on “On writing titles – what do doctoral researchers need to know?”