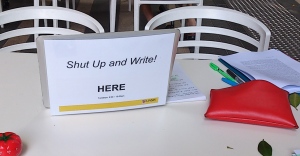 I am watching the curious look inquisitively at this small group of people sitting outside in the sun tapping away at their keyboards. It’s hard to tell those who are intentionally part of our new ‘Shut up and write!’ from those who just happened, accidently, to lob here today. There’s the usual café sounds: orders being given and names being called out, cutlery clattering, cups meeting saucers and spoons. Some people look askance, others quickly soften their voices and look away – as if they have walked in on someone in prayer.

It’s 9.15am and people continue to join us. We are now eight definites and four fringe-dwellers: perhaps the outliers are hedging their bets; not sure enough yet to sit with us.

At the break we talk. Everyone is a doctoral student and immediately there’s an exchange about thesis topics, stage of candidature, software programs, the recent Boot Camp and other group writing opportunities on campus. Everyone wants to make writing normal business. Everyone needs to build writing into their lives so they can get their PhD done.

Then we settle down again to write. Together. In silence. It’s magic.

We have written before about group writing for doctoral scholars and academics including online writing groups, retreats and so on.  In this blog I aim to give an overview of the group writing opportunities that I’m aware of – and to invite readers to tell us about others.

AcWriMo is perhaps the most widely known and popular. Started in 2011 by Charlotte Frost, AcWriMo is an annual online month-long ‘write-a-thon’ fashioned after the successful NaNoWriMo  (National Novel Writing Month). Writers participate via the host – PhD2Published; they determine their own writing goals and are supported by tonnes of social media including dedicated posts, twitter feeds and participant exchanges. You can read here about Cally’s experience with a more localised AcWriMo.

Boot camps work on a similar principle, except that those that I know of bring people together in the same physical space; they are mostly facilitated and very often centrally provisioned by University Grad schools or Writing Centres. Like AcrWriMo, participants set personal writing targets which they aim to meet in a set period of time, such as 2 or 3 days. This blog on the Thesis Whisperer gives a great account of how a Boot Camp works.

‘Shut up and write!’ is a mini writing sprint, rather than a marathon, that usually runs over an hour on a regular basis (eg weekly) in a convivial place. This kind of writing event is popular with doctoral scholars and academics because it’s a relaxed arrangement without hard rules or long term commitment. Participants simply turn up and get on with their writing, in the company of others, for two lots of 25 minute bursts with a five minute break in the middle.

‘Meetup’ writing groups. ‘Meetup’ is a global social networking phenomenon and recently, when invited by a friend to accompany her, I discovered yet another vibrant social writing avenue. Her group meets weekly at a pub in central Sydney where participants write, eat and drink together for 2 hours under the ‘cone of silence’. Thereafter, people mix and socialise as they see fit. I was amazed to discover that these writers included professionals of all kinds, scriptwriters, bloggers – and doctoral students.

Writing retreats are another kind of extended writing together opportunity favoured by doctoral scholars and academics alike. Whether they are highly structured (as described by Rowena Murray) or more organic (see Barbara Grant’s Guide), there’s growing evidence of the value of being able to retreat from the everyday demands and routines of academic life, to spaces entirely dedicated to writing. Susan has written about the pros and cons of writing retreats.

Writing buddies and intimate circles of productivity Finally I’d like to include a plug for the common, but undervalued, practice of hiding oneself away with a colleague/s to write. I’ve been lucky enough to have spent weekends away with doctoral scholars in which we have shared writing, cooking, walking and talking. Pat Thomson’s recent blogs on working with her co-author Barbara Kamler describes the joy (and productivity) of this kind of companionship.

But back at the University of New South Wales’ ‘Shut up and write!’ I overhear a passer-by say (I’m not kidding, I promise!): ‘This is really good. I saw the Research Office advertising … I want to do it – but I don’t have time’.

But that’s the point, isn’t it? – ‘Shut up and write!’ and these other group writing activities are booming because they work especially for those who don’t have time. The popularity of writing in groups is evident everywhere – so if you haven’t already; get yourself into some kind of group writing activity and you will reap the rewards.

And we’d love to know about your own group writing adventures.

3 thoughts on “Writing in the company of others; ‘Shut up and write!’, AcWriMo, boot camps, writing retreats and other fun activities.”