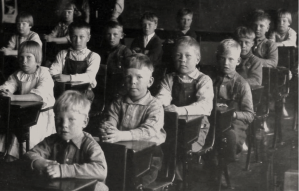 If you’ve been in a school classroom lately, you’ll  be familiar with this refrain. Recently I’ve been volunteering to read with primary school children, and as I’ve sat with these young ones who are often fidgety, yawning and distracted, I am intensely reminded of the bodily or corporeal aspects of learning.

In contemporary educational theory there is a relative lack of attention to bodily aspects of learning–except where it emerges as mostly negative discourses about classroom management or (student) disability. There is even less serious attention to the role of pedagogy for developing bodily habits of learning. In Education, western perspectives are built on a romantic view of childhood that favours individual creativity, student-directed learning and limited teacher intervention. This orientation has positioned regimentation and discipline as negative, even damaging, to creativity and learning. Today’s teachers employ pedagogies that focus on cognitive development and ignore bodily aspects of learning, which are thought to be more appropriately the business of ‘trainers’ than ‘educators’. (If you’re interested in reading more about these ideas, I’d recommend a wonderful book by Megan Watkins.

I’ve been thinking about how this may relate to doctoral scholarship.

Any of us who have worked with doctoral students will have had the privilege of observing and experiencing a huge range of individual work practices over extended periods of time. We also know from reflecting on our own writing practices that we all struggle sometimes to settle down and get on with the job. Self-discipline comes more easily to some than others, and varies according to the task and context. Emotional aspects will also be powerfully affecting. Doing doctoral research is particularly fraught because achievement and progress is so individual. Disciplining oneself is so much harder than submitting oneself to an imposed discipline.

But as far as writing goes, there does seem to be an increasingly popular alternative to solitary, self-directed approaches—in the form of writing retreats.

When I attended my first writing retreat with Rowena Murray, she told us we were to sit together silently and write in structured blocks of time over three days. I was sceptical: I found her approach surprisingly un-cerebral, and I couldn’t imagine this mixture of doctoral students and senior academics submitting to her instructions to write and stop writing by timed slots. I couldn’t imagine myself bowing to somebody else’s structured routine, nor writing on demand. I was used to writing whenever I could fit it in–and certainly not in the company of strangers with my productivity being overseen. It felt like a drill hall with Rowena as the drillmaster. Initially I baulked, but eventually I did settle down–and by the third day, I had developed a kind of bodily stillness that enabled increasingly long stretches of thinking and writing.

Rowena is not the only person who has discovered this unmet need for pedagogical approaches that structure writing, and discipline the writer. For example, at Melbourne University,  Liam Connell runs a highly popular boot camp for doctoral writers. You may know of others.

I am amused by the popularity of this approach in the halls of the academy. Who would have thought! Visions of anarchic schooling and army drills juxtaposed alongside doctoral scholarship! Approaches that attend to the body couldn’t be more different from traditional doctoral teaching and learning practices that are usually thought of as highly cerebral, individualised and intimate spaces defined by the supervisor-student relationship.

In writing retreats an individual’s predilections of habit are overwritten by the regimentation of the programme. In these spaces, curriculum is subservient to pedagogy–an enabling corporeal pedagogy. At such kinds of retreats, consenting adults commit themselves to a training regime that disciplines the body and thereby the mind. It is an explicit pedagogy that aims to ensure a physical commitment to sitting still and doing writing.

I run a lot of writing retreats for academics and research scholars wishing to complete a writing project. Forms of the retreats vary, from the ‘boot camp’ to the more laissez-faire–but what they all have in common is the use of regimentation to discipline the physical body as the foundational step for enabling productivity.

I have enjoyed working with some incredibly self-disciplined doctoral students who have managed to regulate their lives, studies and writing amazingly well. Such students have replaced the external disciplining ‘teacher with stick’ with their own personal training regimes and routines using, for example, writing schedules and self-imposed due dates; often they establish social supports that include obligations to produce. I have also worked with others who find it incredibly, almost pathologically, impossible to organise and discipline themselves. This group, especially, can benefit tremendously from corporeal pedagogies where they can learn the kinds of scholarly habits and strategies that enable productivity.

Does anyone have any strategies / programs they’ve found useful for disciplining the body for improving writer productivity? Perhaps someone wants to suggest a counter argument for such disciplining pedagogies?

5 thoughts on “‘Sit down and do your work!’ Disciplining the writer”